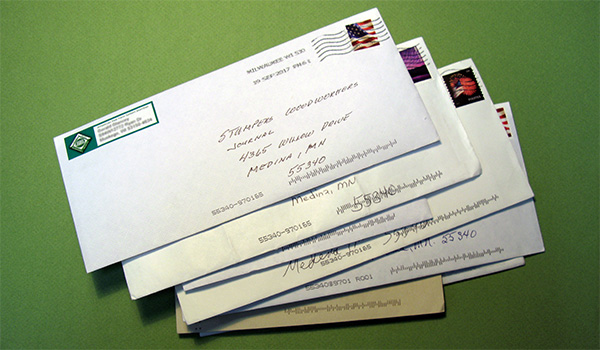 Last week Rob hoped you’d share your favourite woodworking idioms, and a number of other of you will have! – Editor

“I was talking with one of my grandsons awhile back about power tools, and I asked if he had ever used a router. He said isn’t that one of those Internet things? Hhmm. How did this happen? One can certainly mix up saw (verb) with a saw (a cutting tool). Or how about planes? Or bits? Is a megabit used for really big holes? Just about any technical field has its own set of jargon with some terms borrowed from other fields. Other terms are unique to the field but not intuitively obvious. For example, when I first heard the term dongle (back in the 1980s) I had no idea what the person was talking about. English is full of synonyms, homonyms and probably a few other ‘nyms I haven’t heard of. That’s one reason it is hard for non-English speakers to learn it. One of the first rules of English is that there is an exception to every rule.” – Bill Brownmiller

“I’m a stage lighting designer (lots of free time for woodworking projects this year with all of the performance venues under quarantine) and a hobbyist furniture maker. One phrase seems to be very true for both pursuits: ‘Good, Fast, or Cheap. Pick Two.’ I have no idea who came up with it, but we’ve been using that line in live production for at least as long as I’ve been at it (35 years). Recently I read it in an online woodworking forum as well. Good to see that two of my favorite groups of people in the world can share a great quote.” – Benny Kirkham

“How about ‘Let’s nail it down,’ ‘That guy needs to round off his sharp edges,’ ‘on the cutting edge,’ ‘hammering it home’ and ‘it’s plumb straight.’ I could go on and on. I don’t think most people even stop to think about what they’re saying actually referring to something real.” – Rick Corbitt

“That is a knotty question you’ve posed. I wish I had an answer that nailed it on the head, but I don’t. I guess we’re screwed, unless we can plane it down to bare details. Until then maybe we should shelve the discussion. By the way, why do we ‘fell’ a tree? If it already fell, we wouldn’t need to cut it…” – Perry D. Hartmann

“You hit the nail on the head with this question.” – Dave Sanek

“My past career has been in import furniture from the Far East. Many different native species of wood are used to simulate the appearance of U.S. favorites. Often translating the name of the wood into English is next to impossible. The nickname of these eventually become ‘Tiswood. When asked by U.S. buyers what wood that is, the answer would be ‘Tis wood.’ Actually there were many beautiful species there to use, though proper drying was often an issue. Keep making sawdust.” – David Routt

“The first word that comes to mind is ‘shave,’ as in ‘We need to shave a few hundred dollars off of this proposal.’ And how about ‘nailed,’ as in ‘She really nailed that dive and is a deserving gold medal winner.’ Then there’s ‘miter saw,’ as in ‘I miter saw him rob the bank, but I’m not sure. It miter been someone else.’ And let’s not forget ‘twist drill,’ as in ‘We went to the dance and Chubby Checker put us through a twist drill.’ Okay. Maybe I’m trying too hard. But thanks for the opportunity.” – John Koski